219 countries
Clinical trial information and results are updated daily from ClinicalTrials.gov. The latest data update was conducted on 04/16/2021.

CELMoD agents are hypothesized to promote the degradation of target proteins that are important for the biology of multiple diseases; this therapeutic approach has been demonstrated in preclinical studies.1 Proteins targeted by CELMoD agents play an important role in cell apoptosis, differentiation, and proliferation and are deregulated in hematologic malignancies including multiple myeloma, leukemia, diffuse large B-cell lymphoma, and myelodysplastic syndromes.2-6

A large proportion of these target proteins are transcription factors and are difficult to inhibit, at least in part because of their intracellular localization.1,7,8 Degradation of transcription factors by CELMoD agents is a strategy to address proteins important in disease pathophysiology.5 CELMoD agents modulate the function of the ubiquitin proteasome system, or UPS, by co-opting cereblon (CRBN), a component of a ubiquitin E3 ligase complex that is required for the function of protein degradation machinery.1

CRBN is the target protein receptor on the CRL4CRBN E3 ligase complex in the UPS.2,9,10 Preclinical studies demonstrated that CRBN was necessary for the immunomodulatory and anti-myeloma effects of the IMiD® agents lenalidomide and pomalidomide.1 These agents, analogs of thalidomide, represent a subtype of agents now known as the CELMoD agents.1 The interaction of IMiD agents with CRBN has been shown to enhance the binding and ubiquitination of the transcription factors Ikaros and Aiolos; proteasome-dependent destruction of Ikaros and Aiolos in preclinical studies was shown to directly reduce proliferation of myeloma cells and activate T cells.1 CRBN is expressed in a variety of tissues, with the highest levels in immune cells detected in T and B cells.11,12

This understanding of the IMiD agents’ mechanism of action provided rationale for the identification of potential novel modulators of CRBN. 1 Like the IMiD agents lenalidomide and pomalidomide, several novel, more potent CRBN modulators have been shown to target Ikaros and Aiolos in preclinical studies.13-15 CELMoD agents that target proteins other than Ikaros and Aiolos via CRBN modulation are also in development.2,16 In preclinical studies, co-opting of CRBN mediated the ubiquitination and proteasomal degradation of substrate proteins and has been shown to underlie the anti-proliferative and immunomodulatory activities of CELMoD agents, including the IMiD agents lenalidomide and pomalidomide, in malignancies including multiple myeloma, lymphoma, and del(5q) myelodysplastic syndromes.2,6,10,17-20 The redirection of CRBN by lenalidomide has been shown to have tumoricidal effects in non-Hodgkin lymphoma and multiple myeloma through inhibition of expression of oncogenes, such as IRF4.6,21-23 In del(5q) myelodysplastic syndromes, modulation of the CRL4CRBN complex by lenalidomide has been shown to induce ubiquitination of casein kinase 1A1 (CK1α), resulting in its degradation.21 In multiple myeloma, pomalidomide exhibits tumoricidal, immunomodulatory, and anti-stromal support activities through modulation of the CRL4CRBN complex.1 Preclinical studies of two CELMoD agents have demonstrated increased affinity for CRBN and higher potency for CRBN-modulating activity due to rapid and efficient substrate degradation in multiple myeloma and immune effector cells; these features were associated with enhanced antitumor effects and immune stimulation, even in cells that were resistant to IMiD agents.13-15

The immunomodulatory properties of the IMiD agents lenalidomide and pomalidomide have been demonstrated in preclinical studies.2,24-26 IMiD agents have been found to increase activation and proliferation of T cells, production of IL-2, and activity of CD8+ effector T cells.2,24,25 Stimulation and expression of natural killer (NK) cells, NK cell–mediated lysis via antibody-dependent cell-mediated cytotoxicity, and direct NK cell–mediated killing were also enhanced by IMiD agents.24,26 Based in part on these data, we are investigating the role of lenalidomide and pomalidomide in combination with various agents in multiple myeloma.

In addition to immunomodulatory properties, IMiD agents are also hypothesized to exert tumoricidal and antiangiogenic activity.23 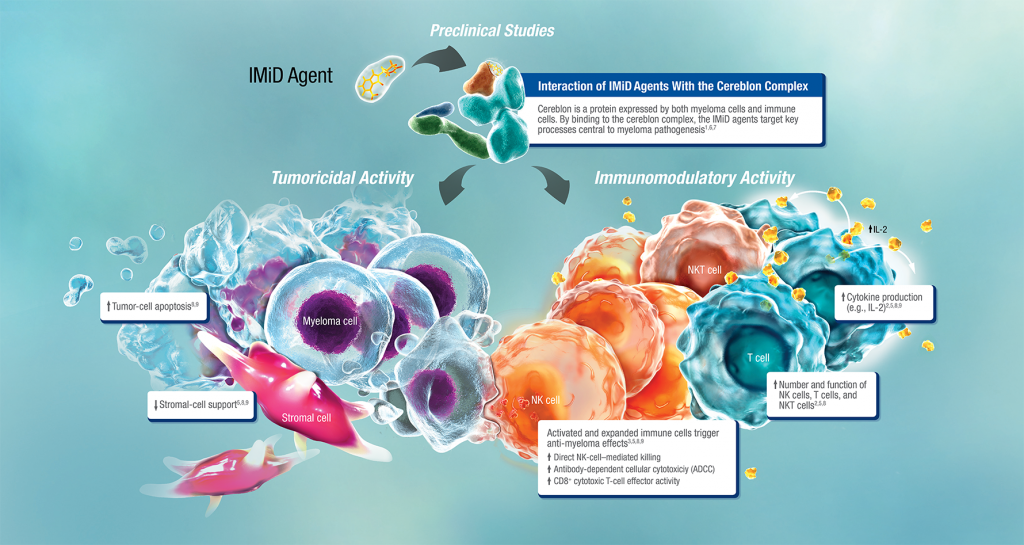