219 countries
Clinical trial information and results are updated daily from ClinicalTrials.gov. The latest data update was conducted on 04/16/2021.

DNA methylation is a modification of cytosine nucleotides catalyzed by DNA methyltransferases.1 This process is important for genomic stability and epigenetic gene silencing in normal cells as well as cellular differentiation during development.2,3 Methylation occurs at CpG dinucleotides, which are often enriched at promoter regions of genes.2,4 In normal tissues, promoter regions are usually unmethylated. Aberrant DNA hypermethylation contributes to gene silencing, including that of tumor suppressor genes, which may promote development and progression of certain cancers.4-9 Aberrant DNA methylation has been observed in correlative studies in a number of malignancies, including myelodysplastic syndromes (MDS), acute myeloid leukemia (AML), breast cancer, and lung cancer.6-11

As the roles of epigenetic modifications in various malignancies are dissected, epigenetic modifying therapies may increasingly play a role in the treatment of cancer.12 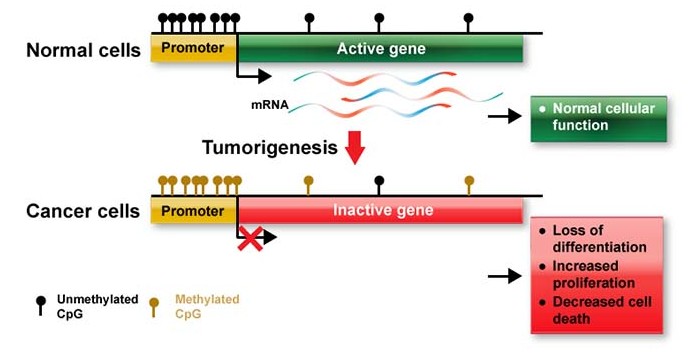